We recently updated our stringing price list for the 28 different strings from 8 different manufacturers that we regularly stock, including: Babolat, Gamma, Luxilon, Prince, Tecnifibre, Volkl, Wilson, and Yonex. 12 of the strings on our list are by Pacific — the major brand we carry and use for ourselves, as our default for our clients, and for the Wake Forest men’s tennis team.

The prices on our list include installation. If you have your own string, that is usually your least expensive option — cost is $17 for installation for new customers. Existing customers, will continue to pay $15 through 2014 as a thanks for your support of our business. Wake Forest University students get a student discount, paying $15.

Consider taking advantage of our “off list” special on LUXILON SAVAGE: $25 installed while supplies last.

We also have random sets of strings that we have accumulated along the way — over 100 — so if you don’t see what you like on the list, please ask if we have what you want.

Tournament stringing is unpredictable. That is the fun and the challenge. One moment you are sitting outside enjoying beautiful weather and a gyro, the next moment you are at the tennis courts picking up rackets because you got the call from the coach that their practice is ending soon.

Game Set Match Tennis is not the official stringer for the NCAA Division 1 men’s and women’s tennis tournament, but many of its clients qualified for the tournament.

The first matches for the women are on Thursday the 17th and for the men Friday the 18th, but we already had 29 rackets come in today. Hopefully business will be strong through Saturday and the teams for which we are string do well in R1.

Early racket and string info from the 15 rackets I did today:

Hopefully as we get busier I will have time to send out reports on our work.

What rackets, strings, and tensions are some of the best 12 and under tennis players in the United States using? Stringing at the USTA National Clay Courts 12s at Hanes Park has given me some insights. Through 3 days of stringing, here is what we saw in terms of rackets. (More on strings and string tensions in the coming days.) 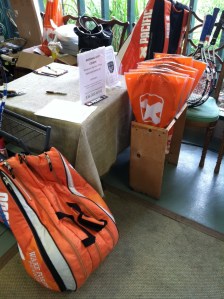 The most commonly used racket brands at this tournament are:

Babolat –32.3% of players stringing with us

Brands not seen in the stringing room include Dunlop, Volkl, Donnay, Solinco, and Pacific.

Most popular racket models are the Babolat AeroPro Drive (including the lighter “Team” version), Wilson BLX 6.1, and the Head YouTek Speed. This is not at all surprising as these are the models endorsed by Rafael Nadal, Roger Federer, and Novak Djokovic, respectively.

The millions in endorsement dollars paid by these racket companies translate rather directly into racket choices by junior players. Of course, junior sponsorships help, and to be sure Babolat, Wilson, and Head are among the most liberal in doling out free and reduced price equipment. But many (most?) of the kids playing at this tournament could get full or partial sponsorship from any of these companies, so their choices are instructive.

One of the most interesting developments I notice in the decades since I was a junior tennis player is the decline of Prince among competitive juniors. Only 6% of players we strung rackets for used Prince. In the 1980s, if memory serves correctly, all of the cool kids played Prince. Now it seems to be more of a racket for recreational players and country clubbers.

I was happy to see a few players using Tecnifibre and Yonex, both of which make fine equipment. Compared to the Babolats and Wilsons of the tennis world, I suppose both of these companies must be content to be niche players. At 6% of the market each at this tournament, that may be right where they want to be.

Greetings from the Country Inn and Suites, Athens, Georgia where I am part of the Game.Set.Match Tennis stringing team for the NCAA Division I Championships. There are 32 teams competing here (16 men’s 16 women’s) and right now we are stringing for 10 of them.

I arrived around noon on Wednesday the 19th. Jay Lewandowski (owner of Game.Set.Match) and Ken Kigongo already had their Babolat Star 5s up and running.

I got mine out of the car and by the time I got it set up the rackets were flooding in, notably with 18 rackets from Virginia (15 Babolat Pure Drives or Pure Drive Roddicks!).

As Jay was running around picking up rackets, Ken and I were grinding away at our machines. By the time we wrapped up at 11:30pm, I had strung 21 rackets (see stringing log below).

In terms of string, of my 20 rackets, only 4 were hybrids and only one had no polyester string in it (female player from UNC). So, 3/4 of the rackets were all-poly. By far the most popular string was Luxilon Big Banger Alu 125. Pacific Poly Force and Babolat Pro Hurricane Tour also were strong, and we saw a little bit of Solinco (showing that their hard work cultivating college customers is paying off some).

In terms of rackets, Babolat was the dominant racket in our stringing room. We saw many Pure Drives, Pure Drive Roddicks, and Pure Drive + in both the regular and Roddick versions. Many European players seem to favor Head frames — in our case Radicals and Extremes (surprisingly did not see any Prestiges). We did a few Princes, but they have clearly lost market share compared to 20 years ago. For someone who deals in smaller market share brands, I was happy to see a smattering of smaller companies like Yonex and Tecnifibre.

In terms of tensions, mid- to high-50s was the norm, with some players pushing into the low 60s. No one strung in the low 50s much less the 40s. The lowest tension I strung was one Pure Drive Roddick + with Luxilon Alu at 54#. The tightest racket I strung by far was a Prince Tour Diablo with all Pacific Poly Force Xtreme at 68#. My arm hurts just looking at it.

At the end of the day, I was able to look back with satisfaction at the fruits of my labor.

Wake Forest’s men’s tennis team is getting ready to head to Lexington, KY this weekend for the National Team Indoors qualifying against Minnesota, and then the winner of Kentucky vs. Michigan.

Here is what the guys will be carrying with them for these matches (tensions are on an electronic constant pull machine; if two strings, the first string listed is main string and second string listed is cross string):