2012 was another great year for Big Time Tennis, many thanks to our customers and opportunities to string at some big tournaments. For the fourth straight year we increased the total number of rackets strung:

Once again, the Wake Forest University men’s tennis team was the backbone of our business. Just over half of the rackets we strung in 2012 were for the Wake men. We are proud of our affiliation with Wake tennis and happy to do our part to keep the team moving forward, even on a 20 racket night like the one pictured below from the spring season. 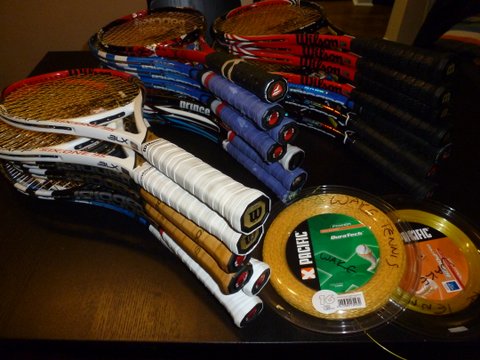 The second largest group of rackets came from three tournaments, two of which we have written about: the NCAA Division I tournament in Athens, Georgia, the combined ATP World Tour and WTA Citi Open in Washington, DC, and our hometown ATP World Tour event, the Winston-Salem Open (motto: Big Time Tennis, Served Southern Style!). We did almost 500 rackets at these three tournaments. Even the junior member of Big Time Tennis had a chance to chip in at the Winston-Salem Open. 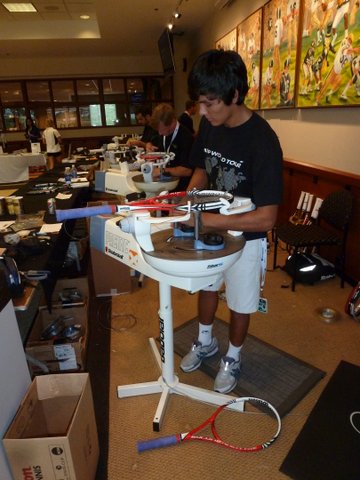 We learn so much stringing in tournament settings, where people’s livelihood’s are dependent on their equipment and nothing less than perfection is acceptable. We have said many times how much we have learned from Jay Lewandowski, owner of Game.Set.Match tennis, who hired us to work at these tournaments. At both the Citi Open and Winston-Salem Open we also benefited from working with Dustin Tankersley, a member of the Wilson stringing team, who is in Australia right now working at the Oz Open. In Winston-Salem, we also enjoyed working alongside RPNY stringer  Benoit Mauguin, who as you can see in the photo below was personally responsible for Andy Roddick’s rackets on tour. 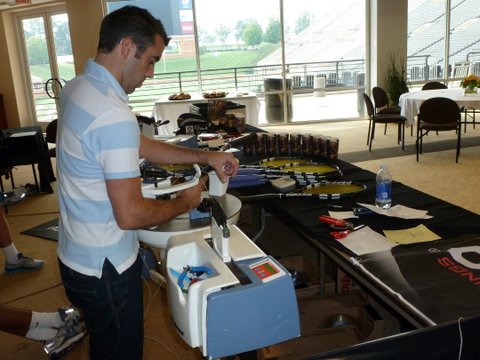 We try to bring the professional tournament stringing attitude to every racket we string. Although non-Wake Forest and non-tournament rackets are just a fraction of all of the rackets we string in any year, we value those clients very much and appreciate their entrusting their rackets to us. We truly see them as clients rather than just customers.

Having strung nearly 1,500 rackets in 2012, we begin to wonder what our total capacity is annually. But believing there is still room for growth, we have made a significant capital investment recently, adding to our arsenal a new stringing machine, the Wilson Baiardo (pictured below), to go along with our Babolat Star 5.

I am home from Athens, Georgia where I spent 5 days stringing as part of the Game Set Match Tennis team. Although not the official stringers for the NCAA Division I Tennis Championships, Game Set Match was in town to provide racket service for its clients who had qualified for the tournament. In fact, Game Set Match Tennis owner Jay Lewandowski and fellow stringing team member Ken Kigongo are still in Athens covering customers who are playing in the individual tournament. Now that I am home, I wanted to offer some reflections on tournament stringing.

I noted in my last post from Athens that tournament stringing is anything but predictable. On my last day in Athens, I didn’t string a racket until 9:30pm. At 9pm, we didn’t know whether we were going to have 3 rackets or 30 to do that night. I ended up doing 11 rackets and finished up around 2:30am stringing at a casual pace and breaking for pizza and coffee. On my way out of town at 7am the next day, I woke up Ken so that he could get started on the 7 rackets he had to do for a player who wanted them strung the same day he was playing and for 10:30am delivery. So, unpredictability and doing whatever it takes to satisfy the customers are among the few constants.

The most significant aspect of tournament stringing as compared to the stringing I ordinarily do is the fact that when I work for Game Set Match Tennis I am part of a team and take direction from the team captain. The team aspect brings two key factors into play: (1) consistency and (2) humility.

Consistency
Along with accuracy, consistency is one of the most important characteristics of professional racket stringing. If I string 4 rackets for a player, each of those rackets should be exactly the same (if that is what the player wants — some of course want rackets at different tensions). If I string a racket and my son strings a racket, those two rackets should be exactly the same.

On a team, the need for consistency is expanded by the number of people on the team. In Athens and at the ATP Winston-Salem Open, the team was 3 people. At the ATP Legg Mason Classic in Washington last year, the team was 4 people stringing on 4 Babolat Star 5 machines.

Installing the string at the correct tension across 4 people and 4 machines requires that the machines be calibrated exactly the same, and that the manner of installation is exactly the same. We all have to use the same techniques for tensioning strings and tying knots, and the same stringing patterns. Small details like how to mount the frame and what grommet holes to tie off in matter.  Inconsistency is simply not acceptable.

Humility
This leads me to my second key factor of being part of a tournament stringing team: humility. There is more than one way to properly string a tennis racket. Anyone who has the chops to string at a major tournament (amateur or professional), knows alot about stringing and has their own opinion on the best ways to install strings. Indeed, one of the fun parts about tournament stringing is comparing notes on stringing techniques. Much of what I have learned about being a stringer has come from these discussions — different patterns for one-piece string jobs, how to avoid pulling string against the mounts on the machine, different ways of tying knots, how to handle textured strings so they don’t get damaged or burn the grommet holes, and so on. Because of this, Jay Lewandowski is not just the Game Set Match Tennis stringing team captain, but he has been a mentor to me as a professional stringer.

I truly do learn something every time I string a tournament. For example, Ken Kigongo and I were talking about one-piece string jobs. (If you use the same string on your main and cross strings, the stringer can either cut the string into two pieces and string the mains and crosses separately, or can use a single piece of string for both the mains and the crosses.) Often a player will want their racket strung one piece, with the main strings at a higher tension than the cross strings. E.g., 55 pounds on the mains and 53 on the crosses. In this case, I would typically pull the last main string at the higher tension, then lower the tension and pull the first cross string. But because the first cross string is connected to the main string, some of the tension on the main string could get lost with the lower tension on the cross. So, Ken prefers to string the first two crosses at the higher tension of the mains so as to “lock in” the tension on the last main. This is something I had never thought about. (Note: This is not reflective of the patterns/techniques used by the Game Set Match Tennis stringing team.)

But at the end of the day, humility is required because no matter our own views of the best way to string a tennis racket, everyone on the Game Set Match Tennis stringing team will string the same way. Here we have humility working in the service of consistency.

Tournament stringing is unpredictable. That is the fun and the challenge. One moment you are sitting outside enjoying beautiful weather and a gyro, the next moment you are at the tennis courts picking up rackets because you got the call from the coach that their practice is ending soon.

Game Set Match Tennis is not the official stringer for the NCAA Division 1 men’s and women’s tennis tournament, but many of its clients qualified for the tournament.

The first matches for the women are on Thursday the 17th and for the men Friday the 18th, but we already had 29 rackets come in today. Hopefully business will be strong through Saturday and the teams for which we are string do well in R1.

Early racket and string info from the 15 rackets I did today:

Hopefully as we get busier I will have time to send out reports on our work.